The exciting news of our collaboration with Beijing’s Magic Mall was announced this week at the Children’s Media Conference in Sheffield. We are really looking forward to working together and creating a wonderful new series for the Chinese audience early next year and introducing Luo Bao Bei internationally soon after. 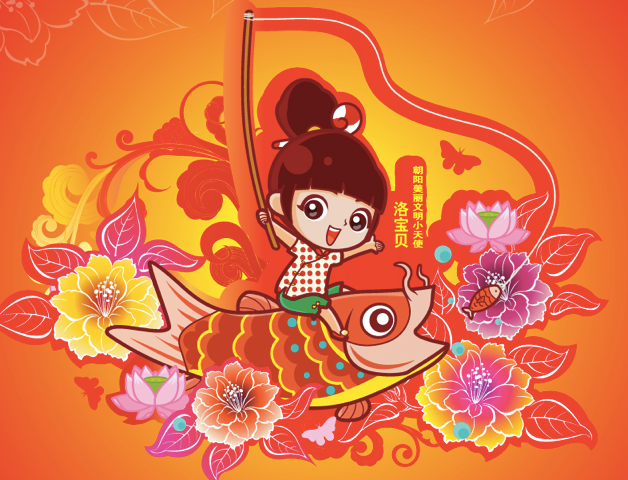 Luo Bao Bei was created by Magic Mall in 2008. She is no stranger to kids in Beijing in her role as city spokesperson, road safety icon, and in popular community outreach programmes in elementary schools. Her popularity ensures the new series will have wide appeal, blending Chinese heritage with a dash of British humour and charm.

‘I look forward to working with Cloth Cat Animation, a young studio bursting with brilliant talent and enthusiasm. When I went to visit them for the first time at the beginning of this year, I was greatly impressed with the various projects I saw. It was of paramount importance to find a creative and production partner who would work with us tirelessly to get everything right from day one in order to have Luo Bao Bei work in China and overseas. I can’t wait to see our beloved character’s brand new show in early 2017.’

‘We are confident that this cooperation will yield the kind of meaningful cultural exchange and quality content that has been missing for this key audience for so long.’

Cloth Cat Animation is an award winning Cardiff-based studio and the largest animation production company in Wales. They are renowned developers and co-production partners and recent projects include TOOT THE TINY TUGBOAT, BOJ, GRANDPA IN MY POCKET, TALES OF FRIENDSHIP WITH WINNIE THE POOH and HA! HA! HAIRIES.

‘It’s going to be a wonderful collaboration to bring our expertise to this Chinese creation. We’re excited about the opportunity to work on something that’s truly multi-cultural, and hoping this series will travel, not only in the country where she’s from, but to the UK and beyond.’

Dave Ingham has co-created, showrun and written on many international hit shows, including: BOJ, THE CLANGERS, CHARLIE AND LOLA, SHAUN THE SHEEP, OCTONAUTS, POCOYO, TOPSY & TIM, TIMMY TIME and many more.

“I’m so excited to be a part of this creative team and am sure Luo Bao Bei will become a show loved by kids the world over.”

Luo Bao Bei is expected to launch in China starting March/April 2017, with international partnerships to follow.